Please fill out the form and we will call you back

Tours of Jerusalem: ancient Jerusalem, quarters of the Old City, the holy sites of the three global religions, historical sites and museums. 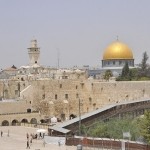 Jerusalem is the city existing for more than 3000 years which was highlighted on ancient maps as the World’s center. Jerusalem is the Sacred City for the believers of three great global religions. For Jewish people it is everlasting capital of Israel since the times of King David, the city where Solomon's Temple (the most important sacred place in Judaism) was built.

For Christians Jerusalem city is the place where the Saviour finished his earthy life. The Prophet Muhammad riding his steed made the ascent to Heaven from Al-Quds (as Islamic people call Jerusalem).

Major part of Jerusalem’s tourist attraction is situated in the Old City. There is an opportunity to walk around the wall and observe all 4 quarters (Jewish, Muslim, Christian, Armenian) of the Old City from above.

Numerous synagogues and yeshivas (religious schools) are situated side by side with expensive mansions of successful businessmen, boutiques and art galleries. The main historical landmark of the quarter and the whole Jewish civilization is the Western Wall. This is the only part remained from the Solomon’s Temple destroyed by the Romans in 1st century CE, that is all than left after sustaining wall of the Temple Mount. Almost two centuries faithful Jewish people have been coming there with the feeling of sorrow that the Temple was lost, and that is why the Western Wall is often called “Wailing Wall”. In Jewish quarter you will stroll along Roman street Cardo, visit ancient Hurva synagogue, Ramban synagogue, Johanan ben Zakai synagogue. You will have particular experience when visiting the Western Wall Tunnel (Hasmonean Tunnel).

Christian holy places are concentrated in the Christian quarter which we will enter though the Lion’s Gate and get in Via Dolorosa, the last path of Jesus he went сarrying the сross on his way to Golgotha. It is the main route for a religious Christian inside the Old City. It is worth walking this route with a guide as it is quite difficult to get through the complicated nest of alleys with no guidance. The Way of the Cross runs through the site where Jesus was sentenced to crucifixion (close to the Church of the Condemnation and Imposition of the Cross and the Church of the Flagellation), nearby Armenian Church of Our Lady of Sorrows where Jesus encountered with Maria. 14 stations of the Way of the Cross will lead us to the Church of the Holy Sepulchre which monumental walls hide Golgotha, the site where Jesus was crucified, buried and then resurrected.

Mount Zion is situated just outside the Old City. It is worth visiting magnificent Dormition Abbey built on the site where home of John (best-loved disciple of Jesus) used to be situated and where the Dormition of the Mother of God occurred. King David’s Tomb is situated in a synagogue not far from the abbey. There is a room which refers to the Last Supper, the last night Jesus spent with his disciples before his arrest, is situated in the same building on the second floor.

Other attractions worth visiting in Jerusalem are listed below:

Thank you! Your order is accepted